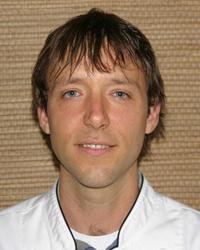 Raw Foods Chef Adam Lewis has a life-long love affair with food. Throughout his childhood he helped his mother in the kitchen preparing meals for the family, including making breads, pastas and pies, going to orchards and canning foods. He wrote his first recipe when he was four years old Caramel corn. His passion for food became a way of life. Adam worked in restaurants during high school and graduated from the Art Institute of Seattle with a degree in Culinary Arts in 2001. He has worked throughout the Pacific Northwest at some of the finest restaurants, working his way up to chef.

After discovering the living foods lifestyle in April of 2007, Adam put away the stove and pulled out the dehydrator. Since that time he has experienced amazing transformations in his physical and mental health and believes that if most of humanity were to follow this wholesome lifestyle, the world would be a better place to live.
Presently, Raw Foods Chef Adam Lewis is running his raw bar, House of the Sun Raw Foods, at Natures Pantry in Bellevue, Washington. With the goal of becoming ever more self-sufficient, Adam grows much of his own produce and wild crafts different varieties of berries. His unique recipes and presentation, of the best food on earth, continue to create quite a buzz in the community. Adams company is dedicated to supporting organic farmers, local people and their products and environmentally sustainable practices.