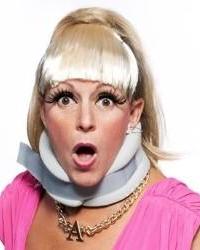 For more than 15 years, Adrienne Truscott—choreographer, circus acrobat, dancer, writer, and as of late, comedian—has been making genre-straddling work in New York City and abroad. In April she was one of 20 artists selected nationally as recipients for the inaugural 2014 Doris Duke Impact Artist Award.  Her evening-length solo comedic work and group choreographic works have been presented variously at Melbourne International Comedy Festival, Just For Laughs, Darwin Festival, PS122, Joe’s Pub, The Kitchen, Dublin Fringe, Danspace, and Dance Theater Workshop among others.

The Wau Wau Sisters, her neo-vaudevillian collaboration with Tanya Gagne, have been presented by such iconic venues as the Sydney Opera House (Aus), Joe’s Pub and CBGB’s (NYC), Victoria Arts Center (Melbourne) and The Roundhouse (London). The Wau Wausisters are fixtures at among others, the Edinburgh, Melbourne, Brighton, Adelaide, Perth and Philadelphia Fringe Festivals and are seen regularly in the international sensations La Soiree and La Clique. Their contemporaries broadly recognize the influence of their radical and ludicrous take on circus and cabaret.

Truscott learned how to and continues to make work in terms of choreographic composition, an early application of form that seemed to allow for the most broad investigation, loose interpretation, and varied possibilities. This impulse remains strong because increasingly live performance strikes her as the most radical way to re-engage people's attention—not just socially or politically, but personally, aesthetically, energetically; the most available way to trigger the act of paying attention. She engages many genres of live performance that look, act, and intend differently. Her work is held uniquely in common by this understanding of composition, enabling it to remain clear while being complex, sophisticated while accessible, available yet mysterious, personally unique while layered in abstraction, entertaining yet rigorous and serious about being humorous. She has consistently sought out different environments/mandates for her work rather than relegating it to specific economic, social, aesthetic, or geographic contexts. She is curious about how modes of presentation (i.e., experimental, international, commercial, or illegal venues) interact with different forms (dance, cabaret, circus, comedy) and how that can upend assumptions that often accompany these forms and their target audiences, respectively.

She is attracted to the possibility of failure as a mandate for rigor.