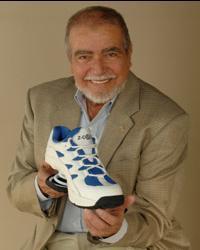 Like the coils in the heels of his own springy shoes, 78-year-old Alvaro Z. Gallegos has experienced plenty of ups and downs in his life, but he keeps on bouncing back.

Its taken 20 years, but Als unusual creation, Z-CoiL Pain Relief Footwear, is at last beginning to receive national attention. In spite of many obstacles and a series of personal tragedies, Al has persevered in pursuit of his crazy dream. And now his odd-looking footwear, engineered to deliver relief from foot, leg, and back pain, is restoring active lives to thousands of suffering people across the country.

Born and raised in a poor farming area in southern Colorado, Al was used to hard work, and knew how to fix anything on his grandfathers farm with a few nuts and bolts and some baling wire. As a descendent of early Spanish settlers, and a farm boy to boot, Al faced his share of prejudice, but he never let that bother him too much. It was never hurtful to me, Al shrugs. It was just something that I blamed on ignorance. Its kind of like arguing politicsyoure not going to change anybodys mind. You just have to go about your business.

And Al did go about his business with the same self-reliant and determined attitude. The Korean War started while Al was in college, so he joined the Air Force and became a fighter pilot, flying many of the early jet fighters, including the F-86 Sabre. When he left the service with the rank of captain, he was at a loss as to what to try next. So he took the advice of his father, a department store manager, and tried opening a small retail store in northern New Mexico.

I was so nervous, Al remembers, and I wondered why a person would want to spend money in my little store. But I got over that, he says, not one to let a little self-doubt get in his way, and then I had 38 years of successful business in retailing. During those years Al opened a variety of highly profitable retail stores, as well as a restaurantno small feat in one of the poorest and least populated states in the nation.

Tragedy is the Mother of Invention

Not long after opening his initial store, Al married, and together he and his wife had eight children. When their youngest was two years old, however, his wife Marcella suffered complications following routine surgery and died.

When Marcella died, Al says, I decided I really needed to stay in condition for the kids, and so I would run two and three times a day. But this regimen eventually took its toll on Als body. Everything started to ache, and he endured a slew of painful injuries caused by the impact of running.

Then, late one night during a run, Al had an epiphany: All of a sudden I thought, if I had springs in my shoes, I could really fly. His next thought was that, with springs in his shoes, maybe he wouldnt get hurt any more either. So he waited for one of the big athletic shoe companies, like Nike or Reebok, to develop this obvious answer for runners in pain.

And he waited. A year or so later, during an argument with two of his brothers over who made the best running shoes, Al blurted out, None of these shoes are any good. In fact, I could make a better shoe. His brother Leo called him on it, saying, Well, if youre so smart, why dont you do it?

Al naturally rose to the challenge, though it would take him several years to design the right kind of coils; find a metal fabricator to make the coils; insert the coils into his running shoes; develop an orthotic support, which he came to realize was a necessary component of the shoes; file a number of patents; and finally locate a shoe manufacturer willing to create a prototype spring shoe for very little money.

Along the way Al was turned down repeatedlyeven laughed atby the professionals he turned to for help with his designsdoctors, engineers, and manufacturers by the score. Yet somehow Al found the courage to continue believing in himself and his ideas, and he never gave up. He felt Marcella was helping him, guiding him, and he wanted to make her proud.

The burden of other tragedies in his life has not slowed Al down either. Just as the Z-CoiL Footwear company was getting off the ground, Als lady friend died of cancer, and his youngest son, Tomas, was killed in a bicycle accident. Al believes he now has a lot of people watching over him from above.

Although Z-CoiL footwear was initially marketed as the best running shoe ever, Al knew from personal experience that the real benefit of the shoes lay in their ability to reduce impact. By reducing impact, these shoes are able to relieve many painful conditions that are typically caused by the strain of running, walking, or even standing for long stretches of time.

Now Al is on a new mission: to help as many people in pain as possible. When I see what we have done for some of the people who have had really bad problems, and see how they react, they cant thank us enough. When a person tells you, with tears in their eyes, that youve given them their life back, Al says, its really powerful.

The Z-CoiL Footwear company, based in Albuquerque, grew by leaps and bounds the first few years, its rapid growth financed largely through private stock offerings. Incidentally, the Z in "Z-CoiL" stands for "Zenas," Al's middle name. Small retail stores were springing up around the country, as enthusiastic customers-turned-dealers sought to bring the same pain relief they had experienced to other aching soles.

Then in 2005, Al and his son Andrs Gallegos, the President and CEO of Z-CoiL Footwear, realized there needed to be more consistency across the distributor network if Z-CoiL was ever to become a household name. So they decided to franchise the Z-CoiL retail opportunity, and new Z-CoiL Pain Relief Footwear stores have continued to open up ever since, carrying Als pain-relief mission to new markets. In late 2007, in response to growing demand, Z-CoiL further expanded its distribution channel to include specialty shoe stores that were willing to be trained in the Z-CoiL custom fitting process.

Z&8208;CoiL Pain Relief Footwear is definitely an innovation whose time has come

Today Al Gallegos remains actively involved with product research and development for Z&8208;CoiL Footwear, where he also serves as Chairman of the Board.