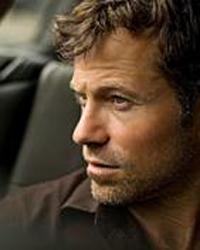 Alex Woodard began his career in acting and had scored several gigs on television throughout his youth, often appearing on the Love Boat and other familiar shows. During this time he was also teaching himself to play the piano and guitar, dreaming of a songwriting career. After graduating from UCLA, Alex took an office job on the East Coast but knew it wasn't what he was looking for. So after a short stint in Boston's financial district, he packed up his truck and made his way across the country to Seattle, picking up a Labrador puppy along the way. He didn't know that puppy would become his best friend and the driving force behind the project that would launch him into the creative consciousness fifteen years later.


As an adult&8208;alternative music artist, Alex put out five albums in a short 10 years, but it was the Americana&8208;tinged '08 album that found some success. "Halfway" garnered airplay at commercial country radio stations, and a music video for 'Reno', with Sara Watkins of Grammy&8208;winning Nickel Creek fame, spent six weeks on CMT's Pure 12&8208;Pack Countdown, two of those weeks at 1.


Just before the record deal fell apart, Alex used an ambitious promotion on to draw attention to his album, where anyone who preordered it would receive a personalized song about their story. Alex was overwhelmed with the letters he received and had no idea it would later turn into a whole new creative life.


Joining a family of prominent musicians in his small beach town home, such as Sean and Sara Watkins Nickel Creek, Jon Foreman Switchfoot, Jordan Pundik New Found Glory, and singer&8208;songwriter Jack Tempchin, Alex created an entire book, album, and concert about other peoples letters. The result is Woodard's, For the Sender: Four Letters. Twelve Songs. One Story, which begins with that puppy he picked up, now a grown dog battling cancer, taking her final breath with her
head in his lap. From there the story wraps around the letters and lyrics as it unfolds into a journey of release and redemption, until Alex finds his own letter tucked away in a box high on a shelf. And like a prayer, he realizes that letter was written more for the sender.


Alex lives with a big dog and a bigger horse in the mountains of Idaho. When he is not writing and playing music, he can most likely be found surfing, riding his horse, and reading the incredible letters people keep sending him.
For further info visit: www.FortheSender.com or www.AlexWoodard.com