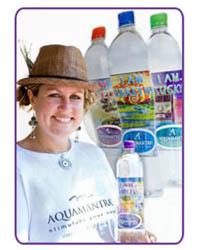 Alexandra Teklak is the creator and President of the Award winning AQUAMANTRA Premium Bottled Water located in Dana Point, California. She is a visionary and innovator responsible for bringing the worlds 1st 100% biodegradable, recyclable and compostable plastic to market.

Starting her career in the film industry and then opening her own boutique design firm, it wasnt until 2005 when Teklak saw the pop culture movie, What The Bleep Do We Know?, that her destiny became revealed right in front of her. The same afternoon she saw the film, the ideas were flowing and AQUAMANTRA was born. The scientist Dr. Masaru Emoto had shown that water was receptive to energy and when tested, showed at a molecular level that water would turn into beautiful looking crystals when the words GRATEFUL or LOVE were taped to bottles. Alexandra felt that if people knew that words could change water, then they just might think twice about themselves, and by changing themselves they, humanity could affect the world.

Alexandra launched AQUAMANTRA in 2006, where Whole Foods immediately brought the new concept water into the Southern California market. Soon after AQUAMANTRA was the first quantum-physics style water to enter into ALBERTSONS in the Southwest Region only a year later. In 2007 AQUAMANTRA won the best tasting bottled water award out of 23 countries, and was featured in SHAPE Magazine as the most inspirational water. AQUAMANTRA has been featured in over 40 magazines and articles, can be seen at Oscar, Emmy and MTV Award events as the premiere water everyone wants, and it all began with one thought. She has proven that if you follow your dreams, anything can happen.

Teklak has already proven to the west coast that her thoughts do matter, because the vision followed by action has developed one product line that just might make the difference in the world, the one she has always dreamed about. She is an inspiration to us alland in this journey she has only just begun, raising consciousness one sip at a time.