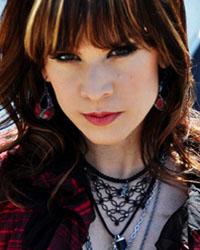 Ali Handal is best known as one of the few women in rock who can solo with the electric fury and fluid grace of a Hendrix, Slash or Page, and is also a multi-award winning songwriter and a uniquely gifted singer. Her songs have been heard in countless movies and TV shows, and her performances have taken her from L.A. to Japan and beyond; she's sung on a Neil Young album, performed at Neverland Ranch, danced with Janet Jackson, written with Paul Williams, had her hands filmed playing guitar in a Playboy video, and even demonstrated guitars several times on "The Price Is Right." Attempting to define the vastness of her musical terrain, Live magazine described her as "Chrissie Hynde meets Ani DiFranco meets Prince."


Ali is currently touring behind the release of her third album, Make Your Move, produced by double Grammy-award winning producer/engineer Seth Horan. Her artistry is perpetually expanding deeper into the realms of love, passion, and the inner battle between fearless independence and the desire for companionship.