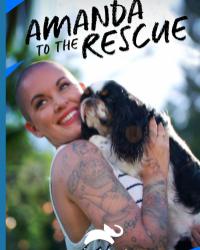 Amanda Giese is the founder of Panda Paws Rescue and with a joy and passion larger than life, she treats the seemingly hopeless animals in her Washington State home, primarily focusing on dogs that others have given up on including major medical or special needs dogs. Together with her two children, Jade and Beast, the family cares for animals in need and helps them get the second chances and loving forever homes they deserve. Where others see animals with no hope, Amanda sees an animal full of love who needs her help. Giese is the new face of the Animal Planet series AMANDA TO THE RESCUE. Throughout the series, Amanda has launched large scale rescue missions across the country to save dozens of animals in need; from the coast of California during deadly wildfires to the islands of Hawaii after the eruption of Kilauea. Her worked has garnered international attention and recognition and earlier this year, Amanda and the series were nominated for a Critics Choice Real TV Award for Best Animal/Nature Show, in addition to winning the Humane Society’s 2019 Genesis Award for Outstanding Reality Series.