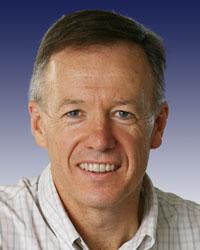 Andrew O'Keeffe has been observing bosses for many years. He's worked for bosses, and he's been a boss. As a senior human resources executive, Andrew has worked closely with a range of bosses in diverse companies over his twenty-five year career. He was worked for IBM, Cable & Wireless and Hewitt Associates. Early in his career, he worked in industrial relations in the mining and manufacturing industries.

Andrew grew up in Broken Hill, Australia and studied economics, industrial relations and psychology at the University of Sydney. He lives in Sydney, Australia and consults in the human dimension of organizations.

Andrew speaks frequently at conferences on the subject of leadership. In October 2008 when Dr. Jane Goodall toured Australia and New Zealand, Dr. Goodall and Andrew joined together to speak to business audiences about leadership lessons from our hardwired instincts.

In December this year Andrew will speak at a conference that features His Holiness the Dalai Lama and Dr Martin Seligman.

While writing The Boss, Andrew talked to a large number of people. Almost everyone had their own boss story to tell, and people always told their stories with emotion - anger, frustration, hurt, despair, amazement, joy, humor. Some of those stories provided content for this book. There was plenty of material.