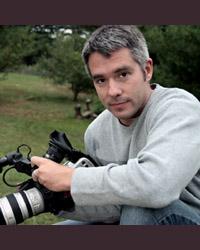 Andy Abrahams Wilson, Producer/Director/CinematographerFounder and president of Open Eye Pictures, is a multi-award winning, Emmy-nominated producer and director of creative non-fiction films. Andy received a BA in cultural anthropology from Northwestern University, and an MA in visual anthropology from the University of Southern California, where he also studied at the USC School of Cinema. Andy's approach emphasizes the moving image as a way to bridge disparate parts, peoples and ideas.

While his work takes on controversial themes, he uses the filmmaking process as an opportunity to encourage empathy and identification, rather than separation and polarization. His production, UNDER OUR SKIN, is the recipient of six best documentary awards at international film festivals and was an Academy Award semifinalist. Andy's films have been shown on HBO, PBS, CBC, the Showtime Networks, and in theaters and film festivals worldwide. A recipient of a Pew Charitable Trust Fellowship in Dance/Media, he has produced several award-winning films on dance or dancers, and is the two-time Grand Prize recipient at the Dance on Camera Film Festival.

Andy is a former budget director of the film distribution cooperative New Day Films and member of the Academy of Television Arts & Sciences. He has received numerous foundation grants, including the California Council for the Humanities, the Nathan Cummings Foundation, the Laurance Rockefeller Foundation, the Columbia Foundation, the Wells Fargo Foundation and the Educational Foundation of America. He was recognized by the Northern California Marin Arts Council as an Outstanding Artist of the Year, and by the Academy of Motion Pictures Arts and Sciences for Outstanding Documentary Achievement. In workshops worldwide and at the renowned Esalen Institute, Andy teaches photography and video as a means of connecting to our environment and our selves.

DIRECTOR'S STATEMENT
Lyme disease is a canary in the coal mine and case study for whatâ€™s poisonous in both our environment and our science. At the epicenter a tiny microbe looms, providing a powerful symbol for an issue that is hidden and lurkingâ€”so small yet immense, so real but unrecognized. What has gotten under our skin is not just a microorganism, but a lethal system which has abandoned some of the most needy and threatens us all. Our own human skin is a microcosm of the earth, and the extent to which the earthâ€™s body is out of balance, so is our own.

I want to show the horror of an illness and an ill system that too long has been ignored. But I also want to show the human and natural beauty right next to it. Sometimes indistinguishable, the beauty and horror are intertwined. If UNDER OUR SKIN merely perpetuates the idea that the natural world is perilous, or that human nature is corrupt, we miss out on the beauty that surrounds us. On the other hand, if we are lulled by convention and donâ€™t look beneath the surface, we risk infection by the equally dangerous maladies of ignorance and indifference.