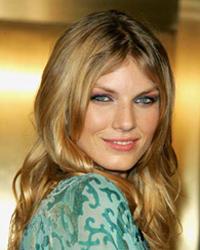 Angela Lindvall was born in Midwest City, Oklahoma. She was raised in Lee's Summit, Missouri. Lindvall herself, although a big fan of Marilyn Monroe as a young teenager, was a tomboy. While doing a local Kansas City fashion show, at age 14, a talent scout spotted her and she signed with IMG.

Angela has appeared on the cover of many notable magazines, such as ELLE, Harper's Bazaar, Marie Claire, Numero, Vogue, I-D and W. She walked in the Victoria's Secret fashion shows in 2000, 2003, 2005, 2006, 2007 and 2008 , and has also appeared in the Fendi, Calvin Klein, Christian Dior, Tommy Hilfiger, Jil Sander, Chanel, Versace, and H&M campaigns. Off the runway, Lindvall has appeared in commercials for H&M, The Gap, and Victoria's Secret. She was the face of the Spanish "high-street" store Zara, and was featured in their spring/summer 2007 campaign. Lindvall has also made appearances in the Sports Illustrated Swimsuit Issue.

As an actress, Lindvall has appeared in CQ 2001 and Kiss Kiss, Bang Bang 2005. She can also be seen in the DKNY promotional films New York Stories 2003 and DKNY Road Stories 2004. Lindvall will appear in the upcoming 2009 horror film Murder World alongside Scout Taylor-Compton.

She is an ardent environmentalist and vegetarian and is the founder and president of the Collage Foundation, an organization promoting sustainability and environmentally conscious choices among young people. She was named Best Dressed Environmentalist in 2004 and 2005 by the Sustainable Style Foundation.

She has two sons, William Dakota b.2002 and Sebastian b.2005. Lindvall is the sister to the late model Audrey Lindvall.