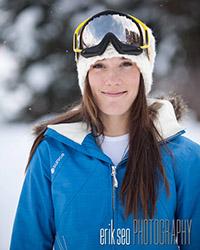 Striking a balance between career and the rest of one's life is not always easy. Especially when that career is a professional skier and involves endless travel, exhausting training and both physical and mental stress. But one athlete who has always been able to balance all that her career thrusts upon her with friendships, family relationships, health struggles and personal time is Angeli VanLaanen. Beyond that, she balances all of this with grace and kindness.

Born and raised in Bellingham, Washington, Angeli grew up in the steep and deep terrain of Mt Baker, one of the most raw and soulful ski areas in North America. For Angeli, best known for her park and pipe prowess, it may come as a surprise that her true background and skill set is in her backcountry abilities. Chasing her older brother Cachaulo off cliffs and through deep powder snow in northern Washington, Angeli developed a strong technical ability for skiing.

But while skiing was always a large part of family time, you will likely still run into Angeli's mom, Allain, on a chairlift at Mt Baker. She will be the beautiful and graceful woman with long hair who just dusted you skiing wasn't the only sport Angeli developed a passion for. Her love and accomplishment of ballet and figure skating can be found in her grace and fluidity on the mountain and her soccer skills and aggressive athleticism transfers to her hard charging ways on skis.

In 2005, after graduating high school, Angeli decided to take a leap of faith and try her luck in the professional freeski arena. She moved to Colorado and began her foray into slopestyle and halfpipe training and competing. It didn't take long for Angeli to find success. That year, at the Vermont Open, Angeli won her first halfpipe contest and placed second in the slopestyle competition. The following year, she won the Vermont Open again, solidifying her mark on the sport. She was rewarded with an X Games invitation the next year, 2007. Angeli has many accomplishments including her New Zealand Open and World Cup golds, her segments in movies such as Uniquely and 44 Days, and her many published photos in various magazines.

But not one to ever be satisfied and rest on her accomplishments, Angeli is always in constant search of the next challenge and next adventure. In 2010 she set off for Haines, Alaska to attend a Heli Guide School. Later that year, she was the first woman to spin over the famed Mt Baker Road Gap and the photo landed in Freeskier Magazine as part of a nine page feature.

Though all that was happening in Angeli's career, she was struggling to find an answer to why her body wasn't keeping up the way it should have. From bouts of fatigue to unexplained ailments such as dizziness and body pain, something wasn't right. After seeing numerous doctors who misdiagnosed her condition for 14 years, Angeli was finally correctly diagnosed with Lyme disease in November of 2009. She was put on a strict regimen of medications she got shipments of IV meds like most girls get shipments of shoes. While undergoing Lyme Disease treatment, Angeli was advised against competing. After 3 years of treatment she entered remission entirely symptom-free, and made an incredible comeback and competed in the 2014 Winter Olympics. She now resides in Bellingham, Washington and is an official member of the US Ski Team.