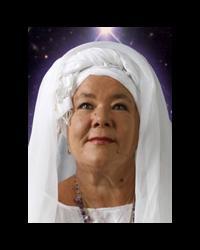 At age 63, for 33years, Anique Radiant Heart has dedicated her life and her talents to assisting women and girls to awaken the great Feminine Divine within them. Gifted with a miraculous voice and the ability to open peoples hearts with her singing and teaching, she has facilitated Goddess mystery workshops/events, celebrating the Goddess through ritual and song in the United Sates, Canada, England, Ireland, France, Italy, Greece, Singapore, Hungary, Holland, Crete, Italy, Taiwan, Australia and New Zealand.

A keen scholar, author, singer/songwriter, artist and political activist, Aniques love for the Earth, women and the Feminine Divine she lovingly calls the Goddess, has been the motivating force behind her extraordinary music and the work she does in the world.
In 1989, Anique founded INVOKING THE GODDESS and created the first web site in Australia solely celebrating the Goddess and the ancient religion of the Goddess. From 1996 till 2002, she organised an annual Goddess festival of the same name in the outskirts of Sydney and published a newsletter which was mailed out free of charge to over 500 subscribers. In 2005, with the help of donations from Goddess worshippers all over the world, Anique founded the Australian Goddess Temple on her land.

At the 2007 Australian Goddess Conference, Anique was honoured as Foremother and Elder of the Goddess Community in Australia. Her work as a spiritual teacher, ceremoni- alist and sacred singer has grounded many in the love and reverence of the Goddess.
For the last 15 years, Anique has toured the world and in 2009, successfully launched her new CD LIVING THE GODDESS which completes the trilogy with INVOKING and EMBRACING THE GODDESS. She is now working on a seven year project which will result in 7 CDs to work with the 7 major chakras. This year, 2010 has seen the birth of the first of these CDs - KUAN YIN Light of Compassion

Anique is a popular and loved presenter and brings with her a unique style of teaching and sacred singing. She lives in the country in Australia with her life partner and three feline familiars and one canine. Her art and her garden complement her music and teaching and provide the serenity of a balanced and grounded heart.