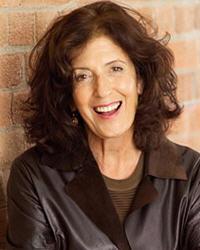 Anita Roddick was born Anita Lucia Perilli in a bomb shelter in Littlehampton UK in 1942 to Italian Jewish. She was one of four children. After leaving school she trained as a teacher at Bath College of Higher Education, and traveled widely with the United Nations before her mother introduced her to Gordon Roddick. The couple opened a restaurant, followed by a hotel. They married in 1970 when Anita was expecting their second child.

Roddick founded The Body Shop in Brighton in the south of England, in 1976 after her husband announced that he wanted to take a couple of years off to trek across South America, and she needed to create a livelihood for herself and her daughters while he was away. The first store sold just 15 lines.

Thanks to her own earlier travels, she had a wealth of experience and exposure to the body rituals of women from all over the world from which to draw. The frugality of her mother also helped Roddick to take a fresh look at retail with such concepts as refillable containers.

Roddicks timing couldnt have been better as the public were starting to look to greener companies and products. Thus she became the first to introduce socially and environmentally responsible business onto the High Street and began talking about fair trade long before it became a buzz word. Today, The Body Shop has almost 2,000 stores serving over 77 million customers in 50 different markets and 25 different languages.

In 2003, Roddick's achievements were recognized when she was knighted by the Queen, and officially styled as Dame Anita Roddick.

Three years later, the Body Shop was purchased by L'Oreal for 652.3 million. This caused controversy, partly because L'Oreal is said to be involved in animal testing, and partly because it is part-owned by multinational conglomerate Nestl - which has been criticized for its treatment of third world producers.

In February 2007, Roddick revealed that she had been diagnosed with Hepatitis C. She said she contracted the virus through a blood transfusion while giving birth to her youngest daughter, Sam, in 1971. She was also suffering cirrhosis of the liver, one of the long-term effects of the disease.

In September 2007, she was taken to St Richard's Hospital in Chichester after complaining of a headache. She suffered a major brain hemorrhage, and died the following day Sept 10. Her husband, Gordon, and daughters Sam and Justine were all with her.