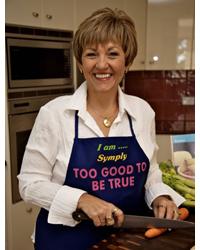 I was a chubby child, cuddly teenager, buxom bride, and an obese adult. My nickname at high school was porky. I was a jolly fatty but I was crying on the inside, wanting desperately to be just like everyone else. I did lose weight occasionally but was never able to keep it off - weight always seemed to find me. I weighed 187lbs on my wedding day. After each baby, I got bigger and bigger, and more insecure about my size. Looking in the mirror would reduce me to tears. I didnt recognize the fat, round, unhappy face staring back at me. Then one day I got a photo in the mail. This was the turning point for me. My best friend had been visiting and had sent me her holiday snaps. In amongst them was a photo of me at Mooloolaba Beach, Australia, walking out of the water. It was horrendous. I weighed 220lbs, all squeezed into my bulging swimming costume.

I sat down and wept. When I looked at that photo I saw an extremely overweight, unhealthy woman and I was only 37 years old.

So I joined a weight-loss group for support. I knew that all the quick fixes I had tried in the past, such as pills, salons, meal replacements, pre-packaged foods, hypnosis etc, were a waste of time. I needed a new approach, so I decided to forget dieting and looked into the health aspect of food. I came to the conclusion that if I was healthy, the weight would come off by itself. I immediately cut out salt, caffeine and alcohol. I started walking and drinking lots of water. Most importantly I started to eat properly. Thats how my love affair with low-fat recipes began.

It took me about 20 months to lose 77lbs and to be honest, there were a couple of times I felt like giving up.

Seven weeks into the program the novelty had started to fade and hunger took over, I remember saying to myself well if people dont like me as I am then thats their problem, but then I wasn't being honest with myself. I knew this wasnt about other people and what they thought, it was about me and I didnt want to be fat anymore.

At one time I was twenty-two pounds from my goal weight I came into a time of complaisance, which lead to lost motivation and desire to lose weight. What I did to over come this was a bit strange, but it really worked and I would suggest to anyone struggling with their weight loss to give this a go. I found a picture in a magazine of a girl who was slim and wearing jeans. I so wanted to be able to wear jeans, as I hadn't had a pair for many years. I found a photo of myself and cut out my face and stuck it over the picture of the girl wearing jeans. Instantly I had a positive visual that made me feel like I wanted to keep going and lose those last few pounds. I wrote under the picture JUST DO IT, ANNETTE and on another piece of paper I put 10 strikes. Each time I lost a pound I crossed one out. As you know I did reach my goal weight and seventeen years on I am still there. Believe me it wasnt as hard as I thought it would be and I now think and act like a healthy person. My new healthy lifestyle has taken me from size 24 clothes into size 12s. The concept really works, which is why I decided to share my recipes with others.

The reason I'm sharing my story with you is to show that we all have good and bad moments and with the right attitude you can achieve anything. Don't give up on yourself, just remember we all have times when we feel down and want to give up but whatever you do, don't. If I had given up I wouldn't have my several pairs of jeans that I love to wear and a life filled with so much joy and abundant health. My advice is to give it a go, what have you got to lose but those pounds.