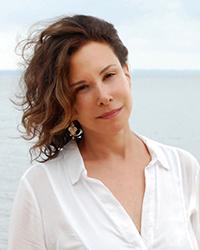 Annie Kagan began writing songs at the age of fourteen. At fifteen, she was signed by a producer from Columbia Records. At sixteen, she was performing in New York City cafes and clubs. After ten years as a songwriter and performer, Annie returned to college, graduating with honors, and became a Doctor of Chiropractic with a successful private practice on Manhattan's Upper East Side.

Attracted to Eastern spiritual traditions, Annie studied yoga and pursued an intense meditation practice. Following her inner voice, she left her career as a doctor and abandoned her hectic city life in search of serenity in a small house by the bay on the tip of Long Island.

Annie returned to songwriting, collaborating with Grammy and Emmy award-winning producer Brian Keane. Brian's high regard for her lyrics inspired Annie to join a writers' workshop. While writing her first novel, her brother Billy died unexpectedly and began speaking to her from the afterlife. She has masterfully combined her talents as a lyricist, performer and healer in order to touch the lives of others with Billy's communications from the other side in her debut book The Afterlife of Billy Fingers. www.anniekagan.com.