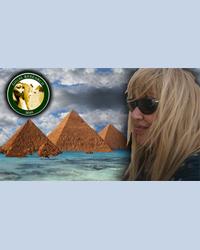 Antoine Gigal is a French explorer, writer and researcher qualified in Oriental Languages and Civilizations from Sorbonne Paris III University. Antoine speaks more than six languages and reads five ancient languages and has traveled worldwide since childhood. She has explored Egypt for the last 20 years, studying every remote place and non public site. She was the permanent correspondent in Egypt for the french magazine:"L'Egypte" and is collaborating with more than five magazines.

She has written and published hundreds of articles. She is the author of the "Secret Chronicles of Giza" and is making research in Egypt with the assistance of scientists who hold her work in high regard. Outside Egypt, with the Giza for Humanity team, she has drawn world-wide attention to the Mauritius Islands for their pyramids and recently discovered structures.

Antoine lectures world-wide on Egypt and megalithic civilizations and as appeared on numerous radio shows... Antoine is the honorary President and Founder of Giza for Humanity Organization - www.gizaforhumanity.org