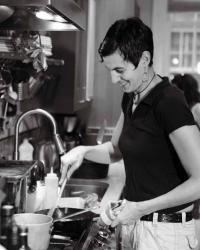 When she's not cavorting around the woods picking wild things or combing the beaches for her next meal, Becky Selengut works as a private chef and cooking teacher. Selengut graduated from the Seattle Culinary Academy at the top of her class and then cut her teeth working the line at several Seattle-area restaurants. An alumna of the internationally renowned Herbfarm Restaurant, Selengut set out on her own in 2004 to start Cornucopia, her private chef and cooking instruction company, followed quickly by the founding of the seasonal,
local foods database SeasonalCornucopia.com.

Once a year, Selengut teaches at the famous Rancho La Puerta cooking school in Baja, Mexico. She also holds year-round classes in Seattle, both privately and for PCC Natural Markets. Selengut is a member of Chefs Collaborative, and donates books, classes, and dinners each year to numerous charitable organizations.

In between gigs, Selengut carries on a lively, award-winning presence online as Chef Reinvented www.chefreinvented.com; she is also a freelance writer for Edible Seattle where she was once asked to go catch crabs and write about it and Seattle Homes and Lifestyles magazines. She is a coauthor of the Washington Local and Seasonal Cookbook Lone Pine 2008 and the author of Good Fish: Sustainable Seafood Recipes from the Pacific Coast Sasquatch 2011.

Selengut lives in Seattle with her sommelier wife, April Pogue, and their two sweet, senile dogs.