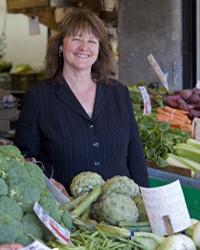 Beve supports the local food community from farm to table and donates 5% of after-tax profits to help end hunger and poverty. She is passionate about nutrition with simple, realistic advice and the support you need to reach your health and wellness goals.

As a native of North Carolina, Beve grew up on a traditional Southern diet. She moved to the Pacific Northwest in 1974. Prior to starting her own company, Beve was a Nutrition Professor at Bastyr University in Kenmore, WA and Nutrition Clinic faculty at the Bastyr Center for Natural Health in Seattle. She started her professional career as a clinical nutritionist at the University of Washington Medical Center where she was awarded Employee of the Month. Beve left UWMC to accept a tenure-track position at Shoreline Community College in Shoreline, WA. She received the Whos Who Among Americas Teachers award in both 2000 and 2005 and has been recognized in the 2008-2010 edition of the Cambridge Whos Who of Executives and Professionals.

Beverly Beve Kindblade graduated from the University of Washington in 1993 with a Master of Science degree in Nutrition Sciences following completion of internship and board requirements for the Registered Dietitian RD credential in 1991. She received her BS in Foods and Nutrition from Oregon State University in 1987.