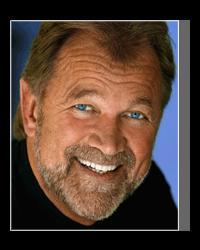 While principally known as an actor,
Mr. Svenson is also an award-winning writer-producer-director. He was born in Sweden to Iris Viola Lola Hertzberg, an actress, singer, and big band leader; and Birger Ragnar Svensson, an accomplished athlete, personal driver and bodyguard for the King of Sweden, and deeply philosophical man who fought on the side of the vastly outnumbered Finns in the Finnish-Russian Winter War 1939-40.
Following a childhood of creative and athletic achievements, Mr. Svenson emigrated without his family to the United States and joined the U.S Marines when he was 17. Honorably discharged after six years of service, he was in pursuit of a Ph.D. in metaphysics when he was 'discovered' by Hollywood. Mr. Svenson has starred in over sixty motion pictures, most of which he has never seen, and several hundred hours of U.S. network televisionditto. He has directed numerous motion pictures, mostly in the action-adventure genre, many under pseudonyms as he was brought in by producers to rescue troubled productions. His television directing credits include Kung Fu: The Legend Continues for Warner Bros. He has also directed numerous television commercials.