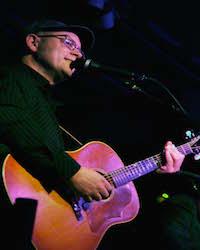 Bob Sima has been awakening for a lifetime. As a small child in suburban America he spent most of his youth on sports fields, diving boards, and barefoot in the backyard chasing fireflies, a setting ripe for daydreaming, wondering, and inquiring.

But there was unrest inside Bob Sima from even this early age. A yearning for something different, a wondering if this dream is all there is to this life. Often he was awake at night pondering the question, "Is this all there is?"

This was Bob's first mini-awakening. This unrest coincided with the time that he picked up his first guitar and knew that someway he would need this guitar. He started writing songs that were rudimentary and simple, but always had a spiritual tone.

His first song, "Chasing Shadows", was clearly a precocious topic for a 12 year old and it certainly didn't fit his Catholic upbringing. The devotion to the path wasn't there, so he did what most would do. He went to sleep, quieting the still, small voice telling him that there was more. The guitar went back in the bag for 20 years.

As a massive restructuring of his life and perceived identity occurred, Bob's outer life took the back burner to the inner life. He downsized everything. He shed a lot of layers, almost all of them, to get to his core.

He immersed himself into the modern and ancient teachings of human potential, transformational work, mindfulness, meditation, yoga, breathwork, and experiential awareness. This is where art meets meaning and dharma.

He's currently recognized as The Transformational Troubadour, Bob is touring internationally, playing intentional concerts and music meditations; teaching and speaking at events and New Thought churches; leading experiential workshops; serving the prison population with mindfulness, meditation and breathwork classes infused with music; strolling hospitals playing songs room-to-room through Musicians on Call --- and offering gratitude concerts or free events wherever and whenever he can serve those who can't get out to experience the music.

To speak of a Bob Sima concert is to describe a poetic experience that captures the heart, the mind, the soul, and the essence of who we all came here to be. People generally find themselves caught between epiphanies and mild hypnosis during his performances - swaying, clapping, singing, and connecting. During passion-charged, consciousness-raising meditational songs, the audience experiences a spectrum of feelings unlike most concert experiences. Emotions range from deep presence to ecstatic empowerment. Everyone leaves feeling hopeful, deeply connected to each other, and euphoric with a strong sense of peace, newness, and calm.