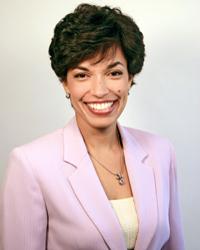 Despite having her right leg amputated at age five, Bonnie became the first African-American to win Olympic medals in ski racing at the 1984 Paralympics. She has been honored for this achievement at Nike Headquarters, at the Essence Awards, at the White House Black History Month celebration, and with a featured quote on millions of Starbucks Cups.

After the Olympics, Bonnie went on to graduate with honors from Harvard, win a Rhodes Scholarship, and earn her Masters in economics from Oxford. In 1992, she worked in the White House as a director of the National Economic Council.

As a highly sought after international keynote speaker, Bonnie St. John has inspired and entertained executives at Pepsi, Pfizer, AT&T, American Express, IBM, the Wits Business School in South Africa, and over 500 more companies and associations. Bonnie has been featured on The Today Show, CNN, Good Morning America, People, Essence, Ebony, The New York Times, and many other national media outlets.

A best-selling author, Bonnies fifth and most recent book, Live Your Joy, features a series of inspirational parables designed to guide you through tips and tools for finding and maintaining joy in a hectic, 21st Century world.