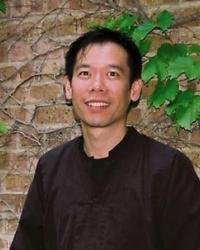 Br. ChiSing, M.Div., M.A. is an Interfaith retreat facilitator, spiritual director, ritual artist, musician, and the founder of "Awakening Heart." He is also a former Community College adjunct professor of World Religions. He was born and raised in Texas, lived in California for ten years, and currently lives in Dallas, Texas, near his family. He has a B.A. in Religion from a Protestant university, a M.A. in Spirituality from a Catholic college, and a Master of Divinity degree from a Unitarian Universalist seminary.
His primary meditation teacher is the Venerable Thich Nhat Hanh, and he was ordained by him into the "Order of Interbeing" Unified Buddhist Church in 2003 with the spiritual name of "True Wonderful Happiness." He was also commissioned into ministry by a congregation of the United Church of Christ UCC in 1995.

In the past, he has collaborated on several events and retreats with S.F. Bay Area spiritual teachers Matthew Fox Creation Spirituality, Original Blessing, Techno Cosmic Mass and Christian de la Huerta Q-Spirit, Coming Out Spiritually, Revolutionary Wisdom. He has led and spoken at several retreats for Interfaith, Buddhist, and Christian communities from as small as 10 to 80 persons to as large as 300 to 800 persons, and he founded three young adult spiritual/social/discussion groups in San Francisco, Berkeley and Los Angeles, as well as a large meditation community in San Francisco. He has also served as a Youth Director, Children's Director and Religious Education Director at various churches. He is the founder of the Dallas Meditation Center, "Awakening Heart" Community of Mindful Living and "One Dharma" Austin, TX.


Br. ChiSing's vision for ministry is to encourage Buddhist, Christian and other faith communities to practice Mindful Spirituality in an Interfaith Earth-based way, with an emphasis on creativity, music and the arts.
Some of Br. ChiSing's past Interfaith work:


facilitated meditation retreats for college students at the University of North Texas UNT in Denton and the University of Minnesota UMN in Minneapolis
preached at several Unitarian Universalist churches in Texas and UCC congregations in California on "Interfaith Buddhist Spirituality"
facilitated music and ritual for Interfaith services at the Unity Church of Dallas, the Center for Spiritual Living, and other New Thought communities
facilitated "Interfaith Christian" retreats co-sponsored by the Minnesota Council of Churches and UCC congregations
facilitated a workshop on "Gifts of Asian Spirituality for Christians" at the General Conference of the Universal Fellowship of Metropolitan Community Churches UFMCC
keynote speaker on "Buddhist Spirituality" at the Annual Forum for The Center for Progressive Christianity TCPC
keynote speaker on "Spirituality and Activism" at the "Re-Energize Texas" conference for young adults regarding climate change issues at the University of Texas UT in Austin
guest speaker at several churches, sanghas, conferences, centers, etc.