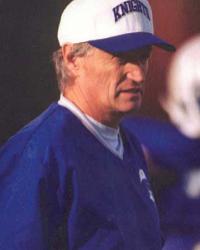 Bruce Brown is a man of many talents, a multi-dimensional man in an often single dimensional world. Brown has been a Teacher, Coach, and Athletic Administrator with 35 years experience working with youth from junior high through the college level.

He is the Director of Proactive Coaching, an organization which conducts workshops and furnishes materials designed to instruct coaches, parents, businesses, school districts and athletes in how they can be effective in building teams and promote character and competence. Brown has coached several sports including football and basketball and was employed by the NFL for 24 years.

Brown currently travels the country giving presentations on character based coaching. He believes that developing character in our youth can help change the culture of our nation. It's that belief that motivates this coach and educator to spend countless hours and thousands of miles on the road, speaking to athletes, parents groups, coaches and businesses.

Sports, which can play a vital role in the development of our youth, is the foundation upon which Brown builds his presentation. As Brown puts it, "The culture of sport is out of perspective." Every night on SportsCenter, we see 8-million athletes who say, "I don't have to practice". They have a sense of entitlement. The danger is in the trickle down effect of that attitude from the professional athlete to the 10-year-old kid. What they see affects how they react to a coach, teammate or official.

Brown has produced six instructional character based coaching DVDs and six basketball instructional DVDs. He is the author of eight coaching books and 17 booklets.

Some of his accomplishments are:

A Teacher, Coach, Athletic Administrator with 35 years experience working with youth
Director of Proactive Coaching
Coached several sports including football and basketball
Employed by the NFL for 24 years
Was the former special presenter for the National Association of Intercollegiate Athletics
Clinician, speaking to Athletes, Coaches, Parents, School Districts and Corporations Nationwide
NAIA National Co-Athletic Director of the Year - 2002