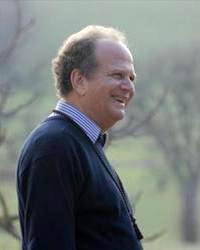 Bruce Davis is one of the world's leading authors on the power of silence, Davis for the past 12 years, has been teaching and guiding people in the art of silence.

Today, he writes, speaks and coaches people on the art of being silent and the joys that come from it. How he came to this unique expertise began during his work on his Ph.D.

While a graduate student, Bruce Davis met and became an apprentice to a remarkable woman who had the gift of entering into and teaching people in their dreams. These years were to be the beginning to Bruce's quest to understand the potential of psychology and spirituality.

In 1975, he wrote the book The Magical Child Within You which was the first book written on trusting and nurturing the inner child. A few years, later he co-authored another bestselling book Hugs & Kisses about loving life, which has been a theme of his work ever since. Through the years, Davis studied and lived with spiritual teachers in India, Philippines, Germany and Bali,Indonesia. For many years, he and Ruth led a program of taking teenagers from one of America's wealthiest communities into the poorest neighborhood of San Francisco to give food to people living in the streets.

A spiritual psychologist and teacher of world religions, Bruce has been leading retreats worldwide since 1983. Davis gently guides the daily retreat meditations at Silent Stay. His work is based in his deep connection to silence, simplicity and heartfulness. He writes an ongoing column in the Huffington Post on the Gifts of Silence.