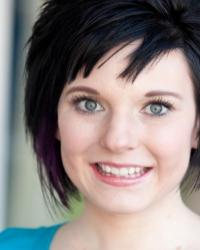 I'm so excited to be your teacher this year. Here's a few things about me. I am originally from Utah. I knew from a very young age (6th grade) that I wanted to be a theater teacher. My family couldn't afford college so I auditioned and received a theater scholarship to Weber State University. During my time at Weber State I learned a little of everything in theater and got to perform in some really fun/creative productions. Many of the characters I've played stole my heart but my all time favorite has been Michael in Peter Pan. When I graduated I had the honor of teaching seven wonderful years at Morgan High School in Morgan Ut. I taught Drama, Musical Theater, Stage Tech and History. I was picked up by a local talent agency and have been in some very fun projects including film and commercials. I caught the adventure bug and decided after living my whole life in Utah, I wanted to try some place new. I have now called Nevada my home going on three years. I love nothing in the world as much as theater and my goal in life is to make you... YES YOU READING THIS... love theater as much as me!

A few useless facts about me:

I am a hotsauce expert. I have even eaten the world's hottest pepper. In my spare time I act in shows and am currently taking voice-over acting lessons. I direct and audition constantly. A starving actor is a good actor. I was most recently a "killer" in a murder mystery dinner theater show downtown. I love STAR WARS, STRANGER THINGS, SAILOR MOON, STAR TREK, DR. WHO, PERIOD DRAMAS, MARVEL MOVIES, DRAGON BALLS Z, INDIANA JONES, DISNEY, HARRY POTTER and basically any other fandom you can imagine. In my "WILDER" days I was in a rock band and hope to be again someday. I Tell "WILDER" Stories...sometimes exaggerated but always entertaining.