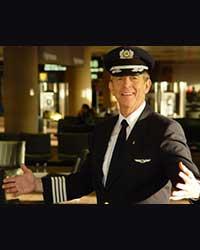 Ron Nielsen, or "Capt. Ron" as one early student dubbed him, was a pilot for over 40 years and spent 30 years as a commercial airline pilot and captain. As a professional pilot he became an expert in Human Factors, the study of how to "trap" aviation mistakes so that they become inconsequential and don't result in accidents. As a sideline, he began helping people overcome their fear of flying over 26 years ago. He has a Masters in Professional Counseling and a Certificate of Advanced Studies in Human Resources.


He is sought out as an expert on aviation safety and the subject of overcoming fear of flying. His program has been featured on The Today Show, The NBC Evening News, Geraldo, and many other TV and radio shows. He has also been featured in nationally recognized publications like USA Today and the Wall Street Journal.