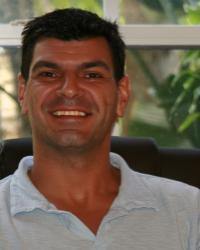 Carey was the founder and president of MAC Multimedia, a multi million dollar media replication and distribution company that produced, manufactured and distributed millions of CDs & DVDs for the publishing, and entertainment industries. Carey worked for 15 years in this industry and experienced rapid growth and success. As fast as success had filled his life it seemed to slip away just as quickly come 2009. With a spiraling economy and a once successful business failing it wasnt long before he found himself in bankruptcy & foreclosure. Carey began to feel the stress and anxiety overwhelm his mind, body and soul. The problems in his marriage that were swept under the rug during the high times soon reared their ugly head and he found himself in the throws of divorce with a partner he couldnt believe he once loved and started a family with. It was time for change and in a big way. Carey soon found his passion in the study of the law of attraction through the works of Abraham by Jerry & Esther Hicks and he also discovered the power of mediation. With a newly awakened soul, the fortunate discovery of Kava and a strong desire to discover his true potential, Carey quickly began to experience magical changes in his life. It was in 2010 that the Men-Hurting and Kava-Traction business ideas were born out of inspiration. Men-Hurting is a website & coaching program developed by Carey to help men who are in relationships with emotionally abusive woman who suffer from cluster B disorders such as Borderline Personality Disorder and Narcissism. Careys program helps men understand these destructive disorders as well as empower them to rediscover their freedom. Kava-Traction is a new concept that combines the benefits of drinking kava with the principles of the law of attraction hence the name Kava-Traction. Careys goal is to help people overcome anxiety and stress naturally while also guiding them to discover their true power from within by awakening to their spirituality and discovering the true power of the law of attraction. Carey is currently coaching men on how to recognize dysfunctional relationships, overcome them and how to become a vibrational match to the relationships they desire.