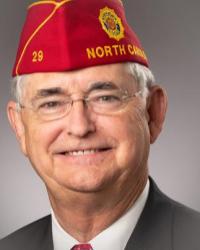 Vietnam War veteran James W. “Bill” Oxford was elected national commander of the nearly 2 million-member American Legion on August 29, 2019 in Indianapolis, during the organization’s 101st national convention. He has been a member of the nation’s largest veterans organization since 1986.

A native of Lenoir, N.C., Oxford is a paid-up-for- life member and past commander of Post 29 in Lenoir. He served as department (state) commander of the North Carolina American Legion from 2010 to 2011. A veteran of the U.S. Marine Corps, Oxford was an aviation electronic technician for the A-6 Intruder and served in Vietnam during his initial enlistment. After being discharged as a sergeant in 1970, Oxford joined the North Carolina National Guard. He subsequently attended officer’s candidate school and transferred to the U.S. Army Reserve, where he ultimately retired as a colonel after more than 34 years of military service.

An active volunteer with several organizations, Oxford is a member of Masonic lodge-York and Scottish Rite. His theme as national commander of The American Legion is “a foundation for the future,” as the organization enters its second century of service