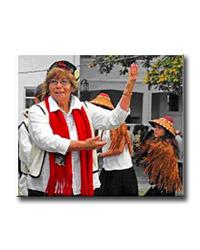 About Duwamish Tribal Services
We are the host tribe for Seattle, our areas only indigenous tribe. Many of our 569 enrolled members still live on Duwamish aboriginal territory, which includes Seattle, Burien, Tukwila, Renton, and Redmond. We have 465 adults and 107 tribal members under the age of 21.

Our tribe is governed by a 1925 constitution and its bylaws. The six-members tribal council, headed by Cecile Hansen since 1975, meets monthly, and tribal gatherings are held at least annually. Tribal leadership has been very stable with fewer than six changes in leadership in the last 85 years.

Approximately 90,000 Native Americans live within a one-hour radius of the city, which represents about half the native people in Washington State. The metropolitan Seattle area is the sixth largest urban population center for Indian people in the U.S. Demographic data shows that the native community here has one of the highest rates of unemployment, high school dropouts, and poor housing.

Duwamish Tribal Services, is a 501c3 organization established in 1983 by the Duwamish Tribal Council to promote the social, cultural, and economic survival of the Duwamish Tribe. We have been seeking federal re-recognition as a tribe for 25 years. DTS has four full time staff members in addition to tribal chair, Cecile Hansen.

We regularly provide Duwamish representatives and speakers for public engagements in the community, schools, universities, and heritage and service organizations. Consistent with native protocol, the Duwamish routinely greet visiting foreign and tribal leaders when they visit our area. Our tribal board members sit on the boards of key community and governmental organization concerning environmental, heritage, tourism, and neighborhood issues.

Since the 1980s, DTS has administered the Emergency Food Assistance Program funded by the Washington States Office of Community, Trade, and Economic Development. The program provides on average 72 native people and their families with monthly foods vouchers and other support services.