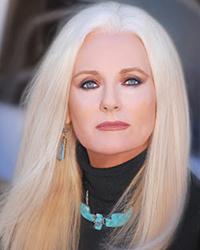 Celeste Yarnall is in the film FEMME and one of its producers. She is an actress, speaker, activist, and film producer who is well known for her guest-starring role on the original Star Trek, and as Elvis Presley's co-star in "Live a Little, Love a Little." However, her true passion is in women's empowerment and healing on all levels for both people and animals.


Celeste earned her doctorate in Nutrition and is the co- author of Holistic Cat Care with Jean Hofve, DVM, the author of Natural Dog Care, and the soon to be released PALEO DOG with Dr. Jean Hofve for Rodale Press. She writes a highly popular blog for the social action network http://www.care2.com, "Celestial Musings" and has contributed to "Natural News Network" http://naturalnews.com, as well as "The New Zealand Journal of Natural Medicine," "Raw Instincts," "Healthy Dogs, Naturally" and many others. Her company, Celestial Pets, offers a clinical nutrition consultation service on holistic alternatives for people and their animal companions.


Along with her husband Nazim Artist, they are the co-producers of Femme: Women Healing the World, directed by Emmanuel Itier, which features Jean Houston, Barbara Marx Hubbard, Karen Tate and Marianne Williamson along with Celeste. The film is produced by Sharon Stone.