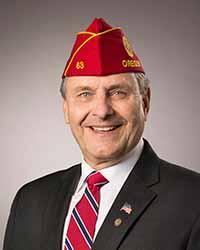 Charles E. Schmidt was elected national commander of the 2.2 million-member American Legion on Sept. 1, 2016, in Cincinnati, Ohio, during the 98th national convention of the nation’s largest veterans organization.

Schmidt enlisted in the U.S. Air Force in 1965 and served on active duty until his retirement in 1993. During that time he advanced from an administrative clerk to become a distinguished graduate of the Air Force Officer Training School, earning a commission and assignments to Executive Support Officer positions at major headquarters. His Air Force assignments took him to Oregon, California, Montana, Nebraska, Colorado, England, Germany, Philippines, and Vietnam. Schmidt served as department (state) commander of the Oregon American Legion in 2004 and 2005. He has served at every level of The American Legion. Schmidt resides in Hines, Oregon, with his wife, Linda.