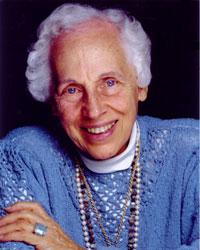 Charlotte Gerson was born in Germany later attending schools in Vienna, Paris and London before coming to New York where she finished her high school education. She subsequently attended Smith College.

Charlotte often visited her father's clinic, Max Gerson, in upstate New York, made rounds with him and assisted him in many ways. She studied his therapy and its application to his patients.

After her father's death, she continued to publish his last book, 'A Cancer Therapy - Results of 50 Cases' and started to lecture on the Gerson Therapy. For the past 35 years, she has lectured widely all over the US, Canada, Mexico as well as in Europe & Australia. She is well known as a speaker at many of the health conventions such as: The Cancer Control Society, The National Health Federation, The Modern Manna Group, The Consumer Health Organization of Canada as well as at many private organizations. Also, for the past 30 years, Charlotte has trained physicians in the Gerson Therapy at Mexican Gerson Therapy Hospitals, Presently, she functions mostly as an independent private consultant and lecturer. On their invitation, she gave testimony to the Joint Parliamentary Committee on Complementary and Alternative Medicine at the British Parliament; has spoken at the Wolfgang Goethe University in Frankfurt, and the London University, various Irish University locations, and in Italy.

Charlotte writes many articles about general health, the Gerson Therapy and recovered patients. She regularly contributes to the Gerson Healing Newsletter and her articles have been reprinted in magazines worldwide.

Charlotte's lastest book, 'Healing the Gerson Way - Defeating Cancer and Other Chronic Diseases', came out in August, 2007. It is new, in excellent style, eminently readable and usable for self-healing. It also has over 90 pages of Gerson recipes.

The Gerson Therapy is a safe, natural treatment developed by Dr. Max Gerson in the 1920's that uses organic foods, juicing, coffee enemas, detoxification and natural supplements to activate the body's ability to heal itself. Over the past 60 years, thousands of people have used the Gerson Therapy to recover from so-called "incurable" diseases such as cancer, diabetes, heart disease and arthritis.

Founded by Charlotte Gerson Dr. Max Gerson's daughter in 1977, they are the true source of information on the original, unmodified, proven Gerson Therapy.