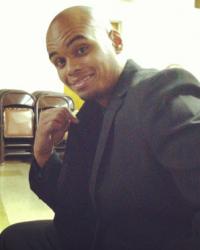 Chasen Crossley was born on June 15, 1983 in Los Angeles, CA. He grew up without an active father. Unfortunately, that missing piece is what Chasen believes was the primary driving force that eventually led to him joining a gang. By the age of 12, he had joined his first gang. Chasen was raised primarily by his mother, with the help of his aunt and uncle. They lived with the daily presence of drugs in the same house. Chasen felt that in order to deal with this daily pain, he had no choice but to run away and live in the streets.

Chasen has always loved being on stage, and although he had to act tough on the streets, he took advantage of any chance he got to perform in drama class.

Chasen is married with two children. He is currently President of the Los Angeles Trade Technical College Speech Club, President of a Toastmasters Club, and is a Key Note Speaker. Currently, Chasen is working on his BA in Business. He is also a counselor, and works on skid row assisting homeless veterans to obtain housing and employment. Connect with Chasen through his email [email protected]