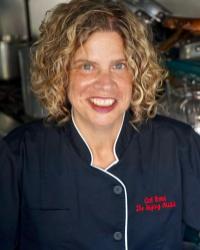 Rossi, yes, she only has one name -– has been a writer for many publications, such as The Daily News, The New York Post, Time Out New York and Mcsweeney's to name a few. She has been the food writer of the "Eat Me" column for Bust magazine since 1998, hosts her own hit radio show on WOMR and WFMR in Cape Cod called "Bite This," now in its seventeenth season, has been featured on "The Food Network" and "NPR” and has been a popular blogger for “The Huffington Post.”

As the owner and executive chef of "The Raging Skillet," a cutting-edge catering company known for breaking any and all rules, Rossi has earned a reputation as the one to call when it's time to do something different.

The Raging Skillet has been called "a new breed of rebel anti-caterer" by The New York Times, "the wildest thing this side of the mason Dixon line" by Zagat and has been named among The Knot’s Best Of Wedding Caterers or New York City 10 years running.

On November of 2015 Rossi’s first memoir; The Raging Skillet/The True Life Story of Chef Rossi was published from the Feminist Press to rave reviews.

“That Raging Skillet” was adapted for the stage in 2017 and has been a sold out smash hit in theaters nationwide from Theater Works in Hartford, to The New Jewish Theatre in St. Louis, The Wellfleet Harbor Actor’s Theatre on Cape Cod, The Jewish Play Project in New York City, The Center Stage Theatre in Rochester and coming in 2021 to the Emerson Theater Collective in Sedona Arizona.

Rossi has been voted one of GO Magazine’s “100 Women We Love.”

“It just takes a little imagination and a lot of Chutzpah to open minds,” says Rossi “and a killer barbecue sauce.”

She has written two full length plays; “Miss New Jersey” and “Queen of the Jews.”

Her short plays; have been performed by The Jewish Women’s Theater in Los Angeles and in New York City by The Village Playwrights, Undiscovered Works, Dixon Place, The Equity Library Theater and the Rogue Theater Festival.

Her second memoir, “Queen of the Jews” is near completion.

Rossi has just completed her screenplay adaptations of “The Raging Skillet” and “Queen of the Jews!”