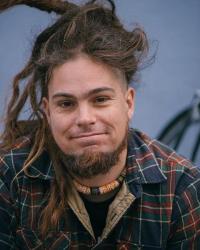 Chris Dyer grew up in Lima,Peru up to the age of 17 and then moved to Canada to study art for severalyears. He’s now based in Montreal, where he works as a freelance artist.

Chris is better known as theartist who does colorful detailed spiritual expressions on recycledskateboards. But he also is pretty active in spray-painting murals worldwide.His canvas paintings are also soulful expressions that have been exhibited insolo and group shows in several galleries around the world including SanFrancisco, New York, Mexico, Peru, Belgium, Paris, and all over Canada and theUnited States.

Other than his fine art,Chris as also served as art director for California’s Creation Skateboards,doing graphics for them and many other skateboard companies, along othercommercial work like cd covers, t-shirts designs, magazine illustrations andadvertisements, etc.

Chris’ positive creationshave been featured in several magazines all over the world, as well as a fewbooks. A full feature movie of his life and art was also released, as well as acoffee table art book by Schiffer Publishing.