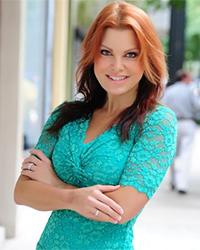 Being diagnosed with rheumatoid arthritis at the age of 22, Cindy Lane Ross has made herself an expert on the topic. This disease can become debilitating, but Cindy has developed an exercise plan specifically for those who suffer with joint pain. She has also become a champion for healthy eating and living, and is leading a challenge to her home city of Mobile, AL, to become a healthier and fitter city.

Cindy's motivation attracts audiences from all age levels and genders by taking the discipline and determination she learned playing tennis at the Worlds' most prestigious tennis academy and then on to turning pro, facing illness at an early age, gaining over 110 lbs, coping with death, and then regaining control of her life, all of this by self-MOTIVATION

Cindy is a highly recognized leader in the Fitness Industry and with her collegiate and professional tennis career, living with arthritis for 14 years, having over 22 surgeries, losing her mother to Scleroderma, a brother to Type I Diabetes, and through her own self-discovery, Cindy shows great fortitude and is ready to MOTIVATE and instill the principals necessary for you to change your life Cindy will leave you in Amazement as she unfolds her story of illness, accomplishments, knowledge of health, fitness, and nutrition

Don't miss out on Cindy's extraordinary story that will not only move you emotionally, it will make you want to jump up out of your seat and go accomplish that goal you have been struggling to meet Cindy graduated with a specialized degree in Exercise Science, with an emphasis in Cardiac/Pulmonary Rehab, and trained at the most prestigious tennis facility in the world, Nick Bollettieri's Tennis Academy, from the age of 13. She also holds numerous certifications in fitness and nutrition, including a specialized certification in diabetes health.

Cindy is the author of the book, Body Type Blueprint, which is available to buy on Amazon. She also writes for 4 National websites, and has written several articles and provided Fitness tips in Arthritis Today, Ask the Trainer, Sports Reports, Mobile Bay Monthly, Access Magazine, and Rheumatoid Arthritis and You. Cindy was also featured on the cover of three National magazine Arthritis Today, RA and You, and Health Monitor, was featured as Teen's Magazine Sport's Girl of the Year, and has appeared in numerous articles. She has made many TV appearances including her TV segments on Channel 15 WPMI. Local 15 news called Healthy Cooking & Workout Wednesdays with Bodies By Cindy, and has a radio show on News Talk Radio called the Bodies By Cindy Show.

Bodies By Cindy is not her only company, she also launched a fitness apparel line called Fit Plus Wear, functional fitness clothing with a plus Cindy Lane Ross is a board member on Arthritis Foundation, Diabetes Foundation, a member of the Obesity Action Coalition, Mobile Area Chamber of Commerce, recognized in Biltmore's Who's Who among business owners, and facilitator for One Mobile's Health plan with Mayor Stimpson.


More information can be found at: