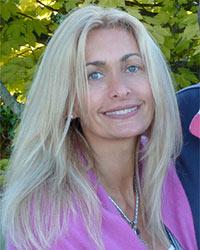 Clare Henry's rich and sacred Journey started from Convent to Cat-walker to Starwalker. Born in Surrey, England, Convent educated and a lover of History,English, Art and Music, Clare left home at the age of 17, University bound but pipped at the post by a famous Photographer Terence Donovan who put her on the road to becoming a famous catwalk/photographic model working with the likes of Marie Helvin and Jerry Hall and Jasmin le Bon to name but a few. She later participated in 17 films in walk-on parts including a Bond film. Clare was asked to star in a film by her dear friends
Dodi Fayed and Jack Weiner called 'FX' but she turned them down to get married.


Her life's course was to change dramatically after a N.D.E. in her twenties, which was a major wake up call for her answering so many questions on 'Life' and 'Death' contrary to what we are all taught regarding religion. Interior Design, working with many clients was her next venture, featuring in 'House & Garden" regularly in between becoming a mother of three incredible children. Pregnancy sparked 20 years of severe life threatening ill health, in and out of hospital,op after op, followed by a life threatening large tumor in her ovaries. It was only when she got a divorce, 'Surrendered' ALL of it...Life, Drama, Sickness and all the suffering and all her possessions, that she was reborn and got a golden ticket- a second chance of life.


Now, Clare is a star walker She lives with God and the Angels in every atom of her being. Her life long spiritual encounters have served her well and now there is no looking back. Clare says "There is no other way for me to live in the world of matter. I am at last 'At peace' here on Earth with the Divine Realms in my heart and soul."


The request from the Angelic realms to write her first book 'Sacred Reflections' and her second book 'The magic of Thomas Cole' has helped many people who feel lost and alone in their lives. Clare has managed to join Heaven and Earth in her beautiful books. A shining example of how we should really live on this earth now at this precious time in the history of the world