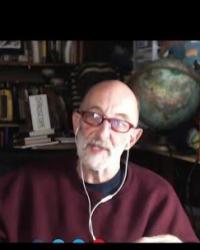 Clif High is a computer scientist and linguistic who has been credited as the founder of the Predictive Linguistics field, a powerful process that analyzes vast amount of internet data to predict future language about future events, due to the nature of humans. His process uses computer software, Web Bots, to aggregate vast amounts of written text from the internet by categories delineated by emotional content of the words.

The field has been expanding ever since its birth in 1997. There are currently many practitioners of Predictive Linguistics, but no one has garnered the reputation and attention as Clif High, it’s founder. His famous prediction in June 2001 which projected “a major ‘tipping point’, that is a ‘life-changing event’ with aspects of ‘military and accident’ that would forever change the way we live to occur inside of 90 days” raised his profile amongst government officials, alternative media, researchers and scholars. Since his first high profile prediction of the events of 911, he has been credited for predicting many other events such as the anthrax attack in Washington, the crash of American 587, the Columbia disaster, the Northeast Power outage, the Banda Aceh earthquake and more recently, Trump’s victory in the national election.

High will be the first to admit that not all of his predictions will come true. He gives various reasons for why predictions may or may not be accurate. However, depending on the nature of the prediction, his work over the last 20 years has shown to come true at least 50% of the time and statistically higher for other categories of analysis. The statistically significant results of his work makes it an important area of study for further research into humans collective conscious and predictive capabilities.

You can buy his reports and learn more about Clif High at www.halfpasthuman.com.