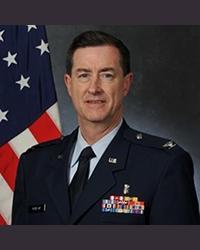 Patrick Johnson, a retired Air Force Reserve Colonel, never saw himself as a candidate for stroke. A vegetarian and an avid runner, Patrick believed he was in good health. In fact, he had taken his Air Force fitness test just three days before having his stroke.

“I had received an excellent score, which to me, reinforced the fact that I was fit and healthy,” said Patrick. “Then, I had a stroke.”

Patrick had gotten up in the middle of the night and on his way back to bed knew something was wrong. “I couldn’t move my left side, my speech was slurred and my face was drooping,” said Patrick. His wife and son, who are also both nurses, immediately recognized the signs of stroke and called 9-1-1.

Paramedics transported Patrick to the hospital within minutes. The stroke team confirmed through a CT scan that he had suffered a severe acute ischemic stroke. Less than two hours after Patrick’s initial onset of symptoms, he was administered treatment to break up the clot in his brain. Thanks to the treatment he received, he returned to work just six days later.

The doctors told Patrick his stroke was brought on by arrhythmias in his heart that caused blood clots to form. He now knows that – despite being in good health - anyone can suffer a stroke. He credits his ongoing recovery to his family, the paramedics and the hospital staff for taking all the appropriate actions to ensure that he received the best possible care.

“I was very fortunate that my family happened to be familiar with the signs and symptoms of stroke, knew to act quickly and get me the appropriate medical attention,” said Patrick. “I encourage everyone to talk to their friends and family about stroke. I know – firsthand - you truly never know what may happen.”