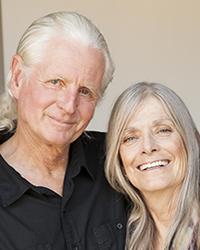 Connie Baxter Marlow BA grew up in Maine, the descendent of Mayflower Pilgrims, visionary philanthropists and politicians, and graduated from UC Berkeley with an honors degree in Economics in 1968. Following an epiphany in the late 80s Connie has developed a unique and inspiring world-view, distilled from two decades of interaction with visionary Native American elders in North America and Mexico, for whom she creates forums to share their understanding of the nature of the Universe.

Connie has been speaking at colleges, universities, high schools and conferences for over 20 years, proposing paradigm-shifting solutions ranging from her new economic theory, a radical take on the events of September 11, 2001, the true nature of the human spirit, the inevitability of peace on earth, the role of Henry David Thoreau in the evolution of democracy, and the spiritual destiny of America. Given the name Eagle Woman in a vision, Connie was instructed to "fly very high and report back all that you see."
The mother of three grown children, she joyfully shares her extraordinary vision with willing ears.