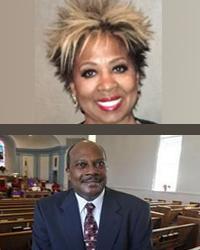 Connie Matthews Harshaw began her career in public service with the U S. Navy at the Newport News Shipyard as a student employee in 1972. She retired from the Federal government as a member of the Senior Executive Service (SES) in 2004 after a 30 year career with the National Institute of Standards and Technology (formerly the National Bureau of Standards); NASA Johnson Space Center in Houston and NASA Headquarters in Washington, Air Force at Langley AFB; NIH National Cancer Institute; Army at Ft. Meade and Navy in Crystal City. Her last appointment, while a career civil servant, was with the National Capital Planning Commission (NCPC) as the Chief Operating Officer. During her tour with NCPC, she became the agency’s first female African-American SES. While at the Commission, she worked with the planners and architects to EXTEND THE LEGACY in the nation’s capital.

In addition to serving the agency’s principal management official, she lists as her most important work, the assignment as Acting Executive Director to negotiate the site parameters for the Dr. Martin Luther King, Jr. Memorial in 1999. She attended Hampton University and transferred to the University of Maryland where she received her BS degree in Business Management and an MBA. She became a Senior Executive Fellow at the John F. Kennedy School of Government at Harvard University and completed the program in 1992. After retirement she formed her own business in Williamsburg, VA and currently serves as a consultant and advisor to several Presidential Appointees in the Washington, DC metropolitan area.

Rev. Dr. Reginald F. Davis of the First Baptist Church in Williamsburg, VA -
The Bell at the First Baptist Church of Williamsburg, one of the oldest African-American Baptist churches in the United States, rang for the first time since segregation in 2016. In 2017, President Obama rang the bell to celebrate the historic grand opening of the National Museum of African American History and Culture. On Sunday, February 25th the bell will ring again to heal America’s racial divide after a tumultuous year marked by violence, strife and protest in Charlottesville, VA, scuffles at the University of Virginia, and rallies across the nation. The First Baptist Church of Williamsburg, will light the way by calling on churches around the country to bring awareness to what unites us, and appeal for racial harmony during the 11’0clock church service - traditionally the most segregated hour of the week in American households.

“Our bell and our church are reminders of our progress towards the pursuit of justice and equality for all,” said Rev. Reginald F. Davis, pastor of the First Baptist Church. “Martin Luther King called for racial harmony from the pulpit of this church. It’s important that we continue his legacy and call on all Americans to heal racial disharmony and strive for justice and equality, the constitutional ideals that are the hallmark of our democracy.”