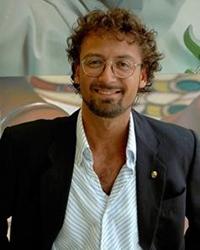 Crtalo Ssamo is an artist, Pranatherapist and spiritual healer. He is also the Ambassador to The Federation of Damanhur, in Piedmont, Italy. Born Alessandro Zattoni in Turin Italy in 1970, his first contact with Damanhur was at the age of 17 as the result of his interest in natural medicine and the development of paranormal faculties. Damanhur, Italy, may be one of the most unique places on earth. Founded by Oberto Airaudi Falco in 1975, Damanhur, which means 'City of Light', is the largest self-sustaining, ecological spiritual community in the 'ancient wisdom-magical tradition.' With its vast complex of homes, shops, art studios, small manufacturing centers and farms, Damanhur is highly organized, integrated, and dedicated to the unification of art, spirituality and science. The Federation is recognized by the UN as a model for global eco-villages and it is also a highly evolved mystery school. Early initiates began carving the worlds largest 5 story subterranean temple network entirely by hand and called it the Temples of Humankind. Some now consider it to be an 8th wonder of the world.


Crtalo's first job there was helping to cut stained glass. He only discovered and was allowed to enter the Temples after being an initiate for a year. Upon entering he found his glass work on the ceiling of the Temple of Humankind. The Temples stayed hidden from the world for 13 years until 1991.

Crtalo has lived and worked at Damanhur as a spiritual researcher now for over 25 years. He specializes in the fields of spiritual healing and the development of human potential with the Olami Damanhur University of which he is now the Director. He is also a specialist in the fields of Spiritual Healing, Ancient Civilizations and Inner Research. He teaches courses in Astral Travel and conscious Out-of-Body Experiences, Past Lives, Inner Harmonizing, Widening of Perception, and Contact with the Plant World. His teaching has taken him all over the world: from the USA, UK, and Canada to Portugal, Holland, Croatia, Slovenia, Austria and Iceland.