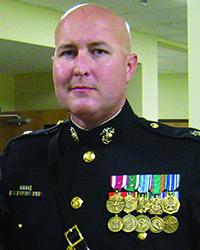 Danny White was born and raised in Taylors, South Carolina. He graduated as the valedictorian from Hampton Park Christian School and attended The Citadel on a Naval ROTC Marine option scholarship. In May 1991, he graduated with a B.S. in Civil Engineering and commissioned as a Second Lieutenant in the Marine Corps. He successfully completed The Basic School TBS in Quantico, Virginia. TBS, a six-month school, focused heavily on the Marine Corps' combat-tested leadership principles.

He transferred to Programs & Resources, Headquarters Marine Corps for his final assignment and retired from the Marine Corps as a Lieutenant Colonel in 2012.

During his career, Danny's superiors consistently recognized him at the end of each assignment with a personal award i.e., a medal for his leadership and process improvement establishing or making the policies and procedures better than when he arrived.

Along his leadership journey, Danny recognized that he's wired with a teacher's heart and has a passion to encourage other leaders at work, at home, and in their communities. He wants to be a channel and not a dam with the lessons learned thus far on his leadership journey as a Marine 21 years, husband 22 years, and father 21 years.

After his retirement, he founded Lead with Liberty LLC as his second calling. Danny feels he has learned more about leadership and communication from his wife Nora of 15 years and rearing their seven children than from any other experience.