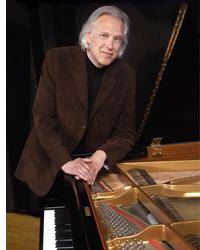 Playing the piano, David Lanz says, is his greatest form of self-expression, especially at his concert performances where he effortlessly blends his emotionally affecting music "a gift to the soul" wrote one reviewer with audience involvement and his own charming comic take on life.


Lanz's solo recordings include the landmark CRISTOFORI'S DREAM, which was Number One on Billboard's first adult alternative/new age chart for 27 weeks and eventually sold platinum. All in all he has released over 20 recordings and sold over 5 million records worldwide. The year 2000 brought David his first Grammy nomination.


Hal Leonard, America's largest music publisher, has released over a dozen songbooks of his music. In addition, David created an instructional piano video, THROUGH THE HANDS OF DAVID LANZ 1997. In this video, he reveals his versatile style through discussions, demonstrations and performances of his beloved melodies. The video includes complete performances of some of his most popular songs.


"All the years I was playing rock while getting into jazz and classical music, I had a feeling I might be destined for some success, and the fact that it came in piano instrumental music was a wonderful surprise," he says. "At first, I had to get away from the idea that it was just a diversion from my rock aspirations, but then I came to embrace it. The most fulfilling thing by far is meeting young musicians who get excited about making music by hearing my own. I think back to how important my influences were as a kid, and I feel blessed to play that role for others."


David's latest release is Painting The Sun on Shanachie Records.