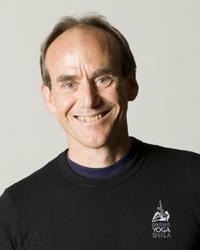 David Swenson began practicing yoga at a very early age in 1969 at the age of 13. His older brother Doug was his first teacher. They practiced hatha yoga from whatever books they could find. David's introduction to Ashtanga came in 1973 when he met David Williams and Nancy Gilgoff in Encinitas, California. In 1975 David and Nancy brought K. Pattabhi Jois to the U.S. for the first time and Swenson was fortunate enough to be there. He then initiated studies directly with the master. Swenson made his first trip to Mysore in 1977 and learned the full Ashtanga system as it was originally taught by K. Pattabhi Jois. David Swenson is recognized today as on of the worlds foremost practitioners and instructors of Ashtanga Yoga. In the last five years David has produced 5 Videos, 4 Audios and written the highly popular book: Ashtanga Yoga The Practice Manual. David has just released 5 new DVDs, 3 CDs and a series of Laminated Practice Cards.