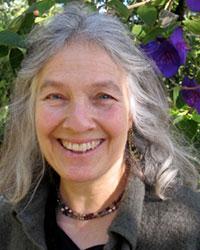 Deborah Koff-Chapin, BFA Cooper Union, is an artist, vocalist, author and teacher. She has been developing the process of Touch Drawing since she discovered it in revelatory play in 1974. Deborah is creator of SoulCards 1&2 and author of Drawing Out Your Soul and The Touch Drawing Facilitator Workbook. She has produced many media projects and an online community to support the dissemination of Touch Drawing worldwide. She is founding director of The Center for Touch Drawing, and has convened the Annual Touch Drawing Gathering since 1997.


Deborah is on the faculty of California Institute of Integral Studies, Esalen, and Kaiser Institutes. She has presented at numerous programs and conferences including Naropa Institute, Omega Institute, JFK School of Arts and Consciousness, School of Visual Arts, The American Art Therapy Association, and The Association for Humanistic Psychology. She has served on the board of directors of The International Expressive Arts Therapy Association. Deborah's workshops and Interpretive Touch Drawing have been integrated into conferences on everything from consciousness to executive retreats for health systems. She has been Interpretive Artist at conferences including Engaging the Other, Sacred Activism, Sacred in the Arts and Seeds of Compassion with the Dalai Lama and Archbishop Desmond Tutu. Deborah's artwork and essays have been published in numerous magazines, journals and books.