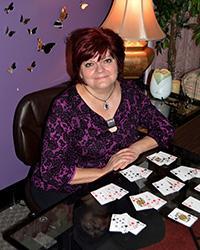 Deborah Leigh has been reading ordinary playing cards and advancing the principles of Personal Prophesy for the past 32 years while conducting readings and intuitive coaching sessions for those across the globe. She learned everything she knows about intuitive perception and how to use it as a viable tool in order to live a happier, more empowered and fulfilled life from her maternal grandmother. She was taught the revolutionary Personal Prophesy philosophy and its highly unique method of perceiving the future from playing cards two years before her grandmother passed away.To this day, Deborah has not been able to find information specifically about this method anywhere aside from what she learned from her own grandmother’s teachings.

In late 1997, she was discovered by AOL while giving readings via the site’s public chat rooms,subsequently asked to become AOL’s own resident “Psychic Love Doctor.” Deborah accepted the offer and holds the distinction of being the first featured chat host to crash a segment of the Digital City mainframe due to the multitude of those who attempted to attend her online reading sessions.She was the first to have a special jumbo sized chat room designed specifically for her and herfollowers in early 1998.

Deborah has been recognized as the original Psychic Love Doctor ever since.

Due to her popular affiliation with AOL, she was syndicated with a showcased presence on iVillage.com and Women.com by the end of that year. In 2000, Vzones.com also showcased Deborah’s work as the Psychic Love Doctor with a prominent presence in its virtual social community, New Horizone. In 2004, Deborah took a sabbatical from her online work with AOL and the other websites to focus on completing her book on Personal Prophesy which had been in the draft stage for over ten years.

She still conducted readings on a regular basis from her website PsychicLoveDoctor.com. A large number of her clients from 1997 receive personal email readings from her through her website to this day.

Deborah’s book, “The Message: Your Secrets in the Cards” was published in 2008 by O Books at its completion.

While Deborah is a professional intuitive coach/counselor who uses her perception to help others find happier and more fulfilling lives, she also personally trains those who want to learn to perceive the future for themselves using the Personal Prophesy method. Many around the world are now credentialed by Deborah as professional practitioners of Personal Prophesy as she is the only living subject matter expert of this method.

Originally from northern Minnesota, Deborah has been living in the Hampton Roads, Virginia area for the past 26 years. She is married and the mother of six sons. Deborah is also a holistic health