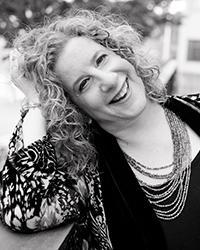 Deborah Mia Shelton is a jazz and devotional vocalist and music educator. She recently released her debut CD entitled “In Praise of Whole Notes” after a seventeen year journey through the underworld of chronic Lyme Disease and Chronic Fatigue Syndrome. Lyme and several of its co-infections left her nasal passages so swollen, she couldn’t even hum. Deborah Mia crisscrossed the United States and the Atlantic in search of healing that would allow her to reclaim her ability to sing with ease and grace. Her epic and transformational journey led her through seven years of silence, facing unhealed family wounds and fears as a child of Holocaust survivors when she travelled to Germany for treatment, and onto the spiritual paths of Buddhism and Science of Mind, which led her to become a volunteer hospital chaplain and a devotional vocalist.

Though the swelling of her nasal turbinates was far from healed, Shelton found she could not live without singing. Her path back to the bandstand has been a long and gradual one. After she returned home from her first treatment of six months of intravenous antibiotics, she joined a 90 voice choir at the Center for Spiritual Living across the street from her apartment. At first, she could only stand up for 20 minutes of each rehearsal. Over the course of a year, she was able to sing with the choir for a whole service, and discovered two things that informed her dream and journey of reclaiming her path as a vocalist; healing and the spiritual quest had always been at the heart of her singing, even while singing jazz before her illness, and, now that stamina was a limiting factor in her ability to perform, singing in a spiritual setting was in her reach, as the “performance” involved as much sitting and listening as standing and singing! Deborah Mia has sung as a soloist and in ensembles under her own direction at The Amazing Grace Spiritual Center and Congregation Eitz Or for the last ten years.

But singing jazz was another story. Improvisation requires a freedom of expression that she was still unable to achieve due to the inflammation of her nasal turbinates. It stopped her from hearing her own voice accurately and from using the conventional vocal technique she had so enjoyed learning with vocalist Dominique Eade when she was a student at The New England Conservatory of Music. Deborah Mia felt that singing jazz was not something worth doing badly! Yet, she had to sing. Over many years, she met with vocalist Jay Clayton and pianist Randy Halberstadt at Seattle’s Cornish College of the Arts to keep a toe in the water, and was able to do one show that landed her in bed for over a week. Then, in 2015, she hit the jackpot of combining several new treatments for Lyme and detoxification and doing qi gong. These reduced the swelling just enough to allow her to sing with some ease and joy! Deborah Mia finally felt ready to return to the studio to live her dream of completing the CD she was never able to release almost twenty years ago. Working in three hour sessions spaced over a six month period, she was able to combine recordings she made as a young and aspiring jazz vocalist living in Brooklyn with songs she recorded as a middle-aged Lyme survivor in Seattle. In Praise of Whole Notes is a celebration of her love of jazz and the creative process and the truth that nothing can tarnish, violate or destroy the wholeness within us.