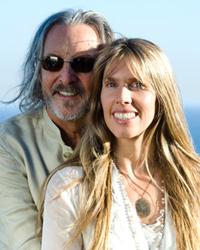 Deva Premal and Miten met in India in 1990 and soon began a journey into love and creativity that has taken their inspiring blend of song, mantra and meditation to a worldwide audience. They have released a string of acclaimed CDs with international sales of nearly one million, and their concerts and ecstatic chant workshops are met with rave reviews throughout Europe, Australia, South America, Canada and the United States.

Their music transcends all the usual musical boundaries, with fans including rock icon Cher, who featured one of Deva's most popular chants, the Gayatri Mantra, on her Farewell Concert Tour; world renowned author and motivational coach Tony Robbins, and even His Holiness The Dalai Lama who, after hearing Deva & Miten sing for a private audience, exclaimed, "Beautiful music, beautiful" Best selling author Eckhart Tolle notes:


"As you listen to the music of Deva and Miten, the sacred space that lies beyond the mind emerges naturally and effortlessly. Pure magic."

German-born Deva Premal is a classically trained musician who grew up singing mantras as bedtime songs. Her mother plays viola da gamba and her father was an artist and a devotee of the spiritual path, including Zen and Yoga. He taught himself Sanskrit and Deva notes that When my mother was pregnant with me, their welcome was to sing the Gayatri Mantra throughout the pregnancy.

As a teenager, she moved away from the confines of both her classical music training in voice, violin and piano, and the mantra practice, and began to explore on her own. At age 11, her search brought her to become a disciple of the enlightened mystic Osho, and later, she went to the ashram in India to begin studies in body work, including massage, shiatsu and cranio-sacral therapies.

It was in Oshos ashram that she and Miten met.

Miten grew up in the 60's. "At that time, England was alive with rock 'n' roll music and the sound of The Beatles. Everywhere you went it was on the street. It was a time of innocence, a time when you could sense the possibility that life has no boundaries."

He later went on to establish a successful career for himself in the 70's and 80's as a singer/songwriter, touring with such bands as Fleetwood Mac, Lou Reed and Ry Cooder. During this time he released two well-received albums, one produced by The Kinks, another by noted Los Angeles producer Bones Howe for Ariola Records.

Ultimately he found the rock 'n' roll life-style unfulfilling and empty, and he began an inner search which led him into the world of meditation. It was at this time he came upon the most important and influential figure in his life, the rebel mystic, Osho.

"After I met Osho, everything fell into place," he says. "He gave purpose to my life, and an understanding that divine chaos is the essence of it. My eyes were opened to new possibilities which I continue to explore to this day."

Miten proceeded to live his explorations, spending most of his time in India at the ashram of Osho, where he eventually found a way to express his gratitude, not surprisingly, through music.