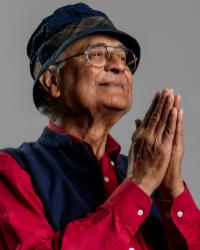 Amit Goswami, Ph. Dformer professor of physics at the University of Oregon, discovered in 1985 the solution to the quantum measurement problem and developed a science of experience explicating how consciousness splits into subject and object.

Subsequently, he developed a theory of reincarnation and integrated conventional and alternative medicine within the new quantum science of health. Among his many other discoveries are the quantum theory of the creative process, the theory of quantum evolution, and the theory of quantum economics that extends Adam Smith’s capitalism into a workable paradigm for the 21st century.

In 2009, he started a movement called "quantum activism," now gaining ground in North and South America, Southern and Eastern Europe, and India. In India in 2018, together with his collaborators, he established Quantum Activism Vishwalayam, an institution of transformative education based on quantum science and the primacy of consciousness.

The author of numerous books—most notably The Self-Aware Universe, Physics of the Soul, The Quantum Doctor, God is Not Dead, Quantum Creativity, and The Everything Answer Book—Dr. Goswami was featured in the movie What the Bleep Do We Know!?, as well as the documentaries Dalai Lama Renaissance and The Quantum Activist.

Amit is a much sought-after lecturer and spiritual practitioner and calls himself “A quantum activist in search of Wholeness.”